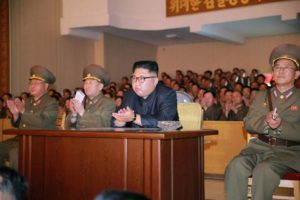 This picture taken on August 14, 2017 and released from North Korea’s official Korean Central News Agency (KCNA) on August 15, 2017 shows North Korean leader Kim Jong-Un (C) clapping hands while viewing a stage during his inspecting the Command of the Strategic Force of the Korean People’s Army (KPA) at an undisclosed location.

North Korean leader Kim Jong-Un said on August 15 he would hold off on a planned missile strike near Guam, but warned the highly provocative move would go ahead in the event of further “reckless actions” by Washington. / AFP PHOTO / KCNA VIS KNS / STR / South Korea OUT / REPUBLIC OF KOREA OUT —EDITORS NOTE— RESTRICTED TO EDITORIAL USE – MANDATORY CREDIT “AFP PHOTO/KCNA VIA KNS” – NO MARKETING NO ADVERTISING CAMPAIGNS – DISTRIBUTED AS A SERVICE TO CLIENTS
THIS PICTURE WAS MADE AVAILABLE BY A THIRD PARTY. AFP CAN NOT INDEPENDENTLY VERIFY THE AUTHENTICITY, LOCATION, DATE AND CONTENT OF THIS IMAGE. THIS PHOTO IS DISTRIBUTED EXACTLY AS RECEIVED BY AFP. /